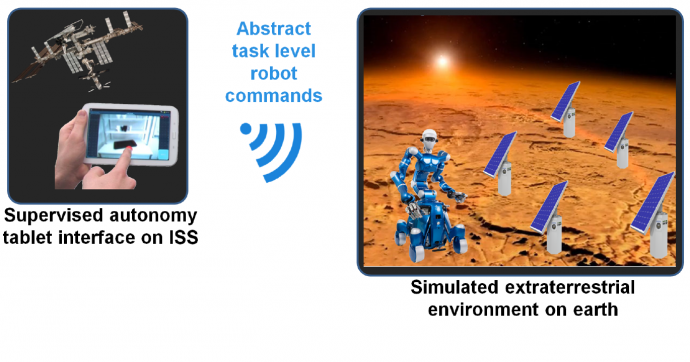 Our late breaking report entitled “Command Robots from Orbit with Supervised Autonomy: An Introduction to the Meteron Supvis-Justin Experiment” has been accepted for publication in the Proc. of the 2015 ACM/IEEE International Conference on Human-Robot Interaction.

The short paper summarizes the planned Supvis-Justin experiment and expected results. The work will be presented at the HRI Conference in Portland/USA at the 3rd-5th of March.

Abstract – The on-going work at German Aerospace Center (DLR) and European Space Agency (ESA) on the Meteron Supvis-Justin space telerobotic experiment utilizing supervised autonomy is presented. The Supvis-Justin experiment will employ a tablet UI for an astronaut on the International Space Station (ISS) to communicate task level commands to a service robot. The goal is to explore the viability of supervised autonomy for space telerobotics. For its validation, survey, navigation, inspection, and maintenance tasks will be commanded to DLR’s service robot, Rollin’ Justin, to be performed in a simulated extraterrestrial environment constructed at DLR.