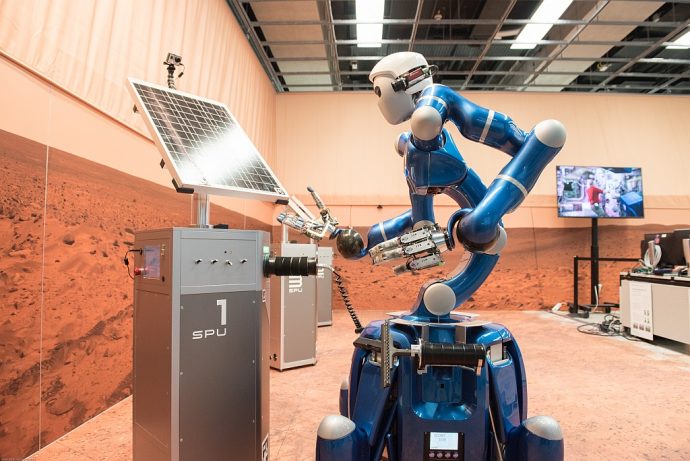 Building on the success of the first ISS crew session in August 2017, Commander Tingle in orbit, and Rollin’ Justin in the Solex environment at DLR Oberpfaffenhofen, were given new tasks of solar panel adjustment, and dust cleaning. Together, the human-robot team has to rotate the solar panel to optimize the solar energy collection. To further improve efficiency, the robot is commanded to wipe off Martian dust from the panel surface with a specially designed wiper. These are significant increases in task difficulty, particularly for the robot, requiring a leap forward in the robot’s dexterity to maneuver objects precisely and delicately. The robot’s the situation awareness has also been enhanced since the previous session to handle the increasingly complex environment he works in, with more objects and more functionality.

The workload of the supervising human crew in orbit is also increased as a result of the new additions to the robot’s functionality. In order to ensure an easy-to-use and intuitive user interface, The SUPVIS Justin tablet GUI software was updated with design changes based on the input of astronauts from orbit and ground training.

The full ISS session took four hours. Commander Tingle and Rollin’ Justin successfully carried out all the assigned tasks. In additional to the orbit and ground data collected for analysis, Commander Tingle gave us valuable feedback on the design of METERON SUPVIS Justin’s teleoperation concept, some of which will be introduced into the next ISS crew session. In his post experiment remarks, Commander Tingle also sees robots as valuable assets for future space missions, relieving astronauts of more tedious and dangerous tasks.

METERON SUPVIS Justin’s next ISS session is slated for August 2018.