ISS Crew have a blast with SUPVIS Justin! 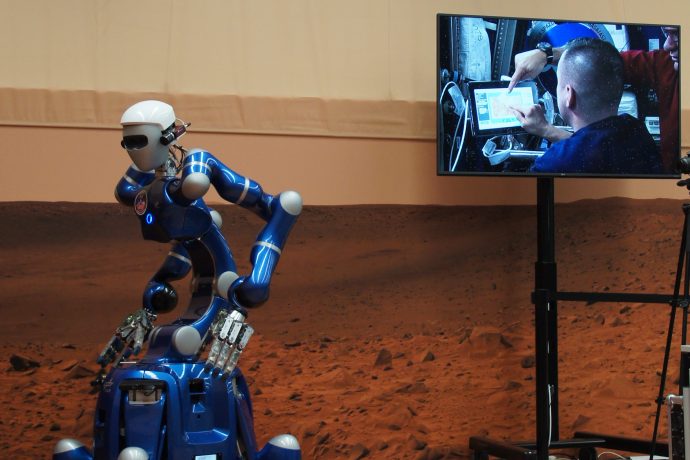 As Hurricane Harvey wreaked havoc on Houston, TX, it also affected the ISS-Ground communication, which is a key part of the infrastructure for the SUPVIS Justin experiment. This gave the experiment a rocky start while we contended with ISS setup and getting ready to start the experiment.

Our ISS crew member, ESA astronaut Paolo Nespoli, was our hero of the day. With the help of the team of experts from DLR and ESA on the ground at DLR-RM, as well as Danish Aerospace, he was able to complete the setup, and perform two SUPVIS Justin protocols in these challenging conditions. Thankfully, from the second protocol onward, the ISS-Ground telerobotics system began to perform increasingly smoothly for the ISS crew and our team on the ground.

Using a tablet PC in the Columbus Module of the ISS, Paolo commanded DLR’s humanoid robot, Rollin’ Justin, to perform different tasks in the simulated Martian solar farm at DLR Oberpfaffenhofen, known as the SOLEX environment. The robot has to be commanded to perform navigation, maintenance, repair, and system updates. Using the concept of Supervised Autonomy, where the robot functions as a coworker for the astronaut on the planetary surface, the astronaut can command the robot to perform complex tasks with task level commands, which greatly reduces the astronaut’s workload. Yet it is still clear at all times that the astronaut is in charge.
As Paolo had been during training sessions at DLR and EAC (European Astronaut Centre), he was an enthusiastic participant, and a fantastic addition to SUPVIS Justin mission. He gave us a lot of insight into how an astronaut can best use a telerobotic system.

Paolo also became our most valuable recruiter and trainer on board the ISS. During our 4-hour ISS-Ground session, he recruited not one, but two more ISS crew members to perform more SUPVIS Justin experiment protocols. NASA astronauts Jack “Two Fish” Fischer, and Randy “Komrade” Bresnik, each performed a different protocol of the SUPVIS Justin experiment. With limited crew time available, the SUPVIS Justin team, both in space and on the ground, had to become very efficient in running the experiment. With an additional 15 minutes crew time we received, we were able to complete the last experiment in the last minute of our time slot. All the hard work in the past several years to make a nimble and robust system really paid off.

All in all, four protocols were carried out, and questionnaires from the three crew members were performed. It is now up to the SUPVIS Justin team to study these invaluable data and our astronauts’ input to design the next SUPVIS Justin experiment protocol, slated for 3-6 months from now. We are continuing on the road to delivering on METERON SUPVIS Justin’s aim of systematically designing and improving a powerful, yet easy-to-use and intuitive user interface, as well as developing useful telerobotic functions to help form the best astronaut-robot tag team possible for future space missions.