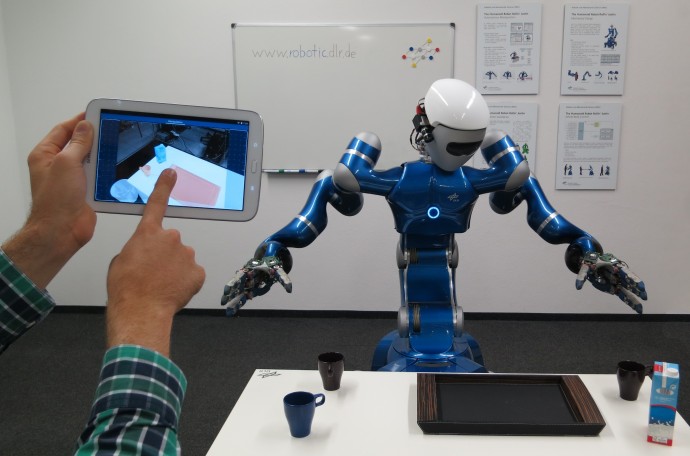 Our paper entitled “A Knowledge-Driven Shared Autonomy Human-Robot Interface for Tablet Computers” has been accepted for publication in the Proc. of the 2014 IEEE-RAS International Conference on Humanoid Robots.

The paper describes the prototype of our Human-Robot Interface which will be used for the SUPVIS-JUSTIN experiment. The work will be presented at the Humanoids Conference in Madrid at the 18th of November.

Abstract – Autonomous and teleoperated robots have been proven to be capable of solving complex manipulation tasks. However, autonomous robots can only be deployed in predefined domains and teleoperation requires full attention of a human operator. Therefore, combining autonomous capabilities of the robot with teleoperation is desirable, yet balancing the work load between robot and operator for intuitive human-robot interfaces is still an open issue. In this paper, we present a knowledge-driven tablet computer application for commanding a robot on a high level of abstraction. The application guides an operators decisions based on the actual world state of the robot and enables the operator to command object-centered actions, which are autonomously interpreted symbolically and geometrically by the robot. We evaluate our approach using the humanoid robot Rollin’ Justin for an elaborate manipulation experiment and an usability user study. We show that our approach efficiently balances the work load between robot and operator and provides an intuitive interface for human-robot interaction.