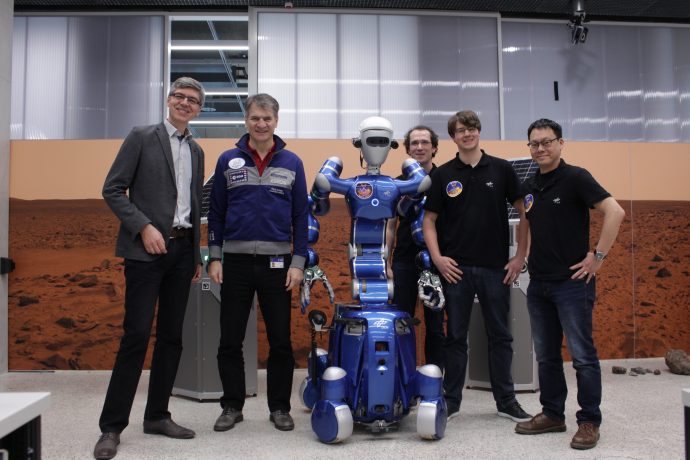 After more than two years in development at DLR and ESA, and hundreds of trials and testing, DLR’s Rollin’ Justin finally met his first ISS  partner for the METERON SUPVIS Justin experiment: ESA astronaut Paolo Nespoli.

Paolo Nespoli (Space Shuttle STS-120, ISS Expedition 26/27, ISS Expedition 52/53) was briefed on the goals of outlook of SUPVIS Justin, and performed different variations of the experiment. He was very quick in getting up to speed on the robot’s capability, and grasping the idea behind supervised autonomy as a tool for the astronaut in orbit to work with the robot on the planet’s surface.

Mr. Nespoli’s shared many insights and discussed his previous experience working with the Canadarm on board the ISS. The expectations of the astronaut lead to some valuable ideas on how to improve the supervised autonomy user interface. With the new information, new modifications will be made to enhance the immersion and usability for the astronaut, all while retaining the low-stress usability. We will continue working with Mr. Nespoli to carry out more tests and try out more ideas until his eventual experiment run on board the ISS this year.

The meeting confirmed the belief that only through final experiments under human space flight condition, would we be able to close the development loop toward a space qualified telerobotic system that can be deploy with confidence. We are anxious and excited to see SUPVIS Justin finally begin its experiments on the ISS!