A new team of astronauts trained and ready for SUPVIS Justin 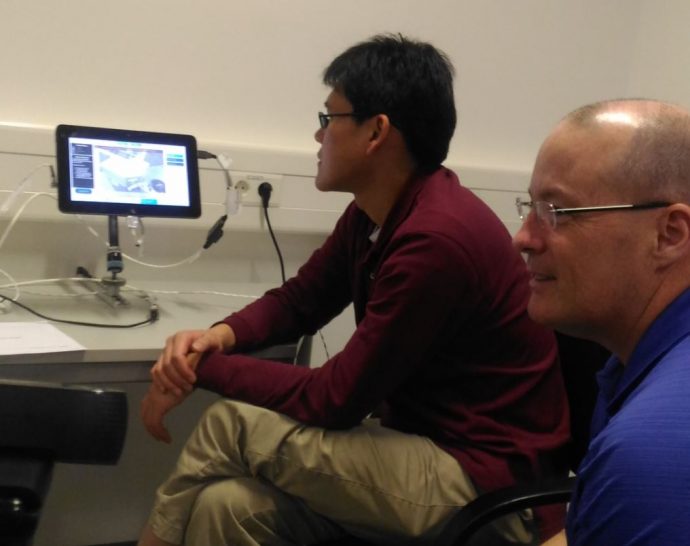 In preparation of the continuing METERON SUPVIS Justin experiments on board the International Space Station, four more Astronauts from ESA, NASA, and JAXA have been trained in the second half of 2018.

The 2nd ISS crew session is set for March 2018. Adding onto the in addition to the navigation, service, and maintenance capabilities tested in the 1st ISS crew session last year, Rollin’ Justin is now able to perform instrument adjustment and solar panel cleaning tasks. This is a big step forward to bringing effective robot coworker to help astronauts carrying out more duties on the planetary surface.

The 3rd session, currently slated for the 2nd half of 2018, will bring even more complexity to the robot task. The astronaut in orbit will be tasked with commanding Justin to perform a full assembly task, during which the components delivered to the planetary surface will have to be retrieved and assembled to the devices already on the planet. The robot will then have to bring the newly installed component to operation. This will be the first time for a robot teleoperated from space to perform a complete task of such high complexity.

For these sessions, we have an international astronaut team of JAXA’s Norishige “Nemo” Kanai, NASA’s Mark Vande Hei, Scott Tingle and Rick Arnold, as well as ESA’s Alexander Gerst. During their training sessions at the European Astronaut Training Center (EAC) in Cologne, Germany, the astronauts were briefed on the capability of the robot and the user interface design. Most of the astronauts were also given the opportunity use the tablet user interface to teleoperate Justin, located about 500 km away at DLR Oberpfaffenhofen. The astronauts were all able to successfully complete the training, and gave the SUPVIS Justin development team valuable feedback on useful robot capability for space teleoperation, and how to improve the users interface. Scott Tingle was particularly excited about his upcoming space-to-ground telerobotic experiment session, and specifically mention this prior to his flight to the ISS.

The SUPVIS Justin team also eagerly awaits their collaboration with Rollin’ Justin from the ISS!